In Central North Carolina, the pork BBQ  is chopped by hand and then pulled slightly. Chopping the meat exposes more meat fiber ends and allows the meat to soak up more of the thin vinegar-based BBQ sauce without getting soupy. When selecting your roast, be sure to pick one that will fit into your slow cooker.

1.  Rinse the roast and pat it dry with paper towels. 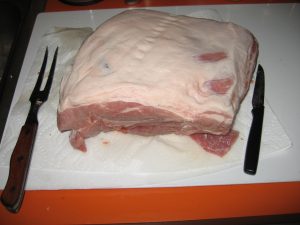 2.  Trim as much fat as possible off the pork roast.  This includes trimming off the fat-cap and any  internal fat you can see from the sides of the roast. 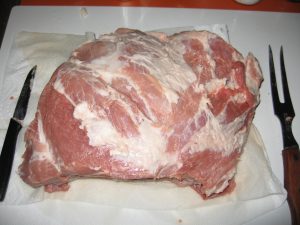 3.  Set the down in the slow cooker with the side originally containing the fat-cap facing down.

4.  Liberally coat the exposed side of the roast with our seasoning and gently knead it into the meat.  While it may have been easier to coat the meat with the rub before placing it in the slow cooker, this method keeps the excess rub in slow cooker. 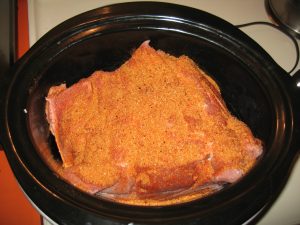 5.  Turn the roast over, being careful that any excess rub stays in the pot.

6.  Coat the exposed side of the roast with rub.

7.  Combine the two vinegars and slowly add them to the slow cooker. Gently lift the meat up about ½ inch to allow the vinegar to get under the roast.  Be sure to leave at least ½ inch of space between the top of the liquid and the top of the pot.

9.  Gently remove the meat from the slow cooker and set it aside for about 15 minutes to rest.  Discard the liquid remaining in the cooker and set aside 1 cup of the cooking liquid. 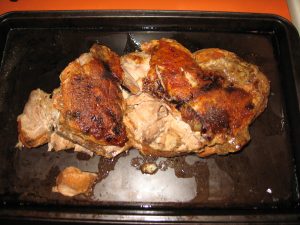 10.  Once the meat has rested, cut it across the grain into 1/2-inch thick slices.

11.  Working on one cube at a time, with a normal fork in each hand, separate the meat fibers (pull the pork). 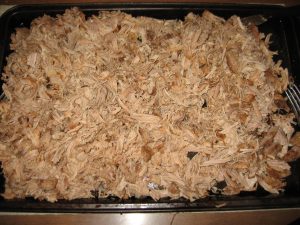 12.  Return the pork to the slow cooker as it is pulled.

13.  Set the slow cooker to low to keep the meat warm.

14. Combine the sauce ingredients and heat until the sugars dissolve.

15.  When all of the meat has been chopped and pulled, add the reserved cooking liquid.

16.  As soon as the meat has warmed back up it is ready to serve along with the sauce on the side.

Any leftover pork can be stored in the refrigerator for up to a week or frozen for up to 6 months.

Reduce the vinegar added in Step 7 by half and add 1 cup of beer or ale.

Add 1 teaspoon of liquid smoke in Step 7 for a slightly smoked flavor.

For a spicier BBQ, stir in crushed red pepper to taste and an additional 1-2 tablespoons of our seasoning before serving.